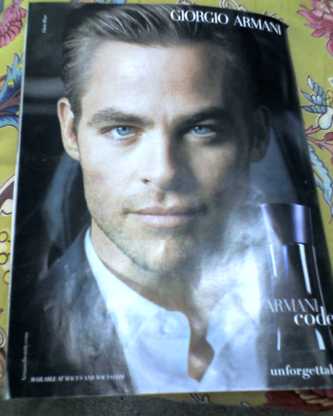 Pine has appeared in countless films, including Star Trek: Into Darkness and its sequel, Jack Ryan: Shadow Recruit, People Like Us, This Means War, Bottle Shock and The Princess Diaries 2. Pine costars in Horrible Bosses 2, which is scheduled for release nationwide on November 26. He’ll also play ‘Cinderella’s Prince, aka Prince Charming,’ in Disney’s Into the Woods, which will be released on Christmas Day.

Note: I snapped this photo while briefly browsing through People magazine’s ‘Sexiest Man Alive’ issue. The ad was on the back cover when it should have been on the front cover! ☺